About the size of a stapler, this new handheld device developed at EFPL is able to test a large number of proteins in our body all at once-a subtle combination of optical science and engineering.

Could it be possible one day to do a complete checkup without a doctor’s visit? EPFL’s latest discovery is headed in that direction. Professor Hatice Altug and postoctoral fellow Arif Cetin, in collaboration with Prof. Aydogan Ozcan from UCLA, have developed an "optical lab on a chip." Compact and inexpensive, it could offer to quickly analyze up to 170,000 different molecules in a blood sample. This method could simultaneously identify insulin levels, cancer and Alzheimer markers, or even certain viruses. "We were looking to build an interface similar to a car’s dashboard, which is able to indicate gas and oil levels as well as let you know if your headlights are on or if your engine is working correctly," explains Altug.

Instead of analyzing the biosample by looking at the spectral properties of the sensing platforms as has traditionally been the case, this new technique uses changes in the intensity of the light to do on-chip imaging, allowing to dispense with the clunky spectrometers in the process.

A precision down to a couple nanometers
Only 7.5 cm high and weighing 60 grams, the device is able to detect viruses and single layer proteins down to 3 nanometers thick. Detailed in a publication in Nature Light Science & Application, the recipe is simple and contains few ingredients: an off the shelf CMOS chip, a light-emitting diode (LED) and a 10 by 10 millimeter gold plate pierced with arrays of extremely small holes less than 200 nanometer wide.

Nanoholes on the gold substrates are compartmented into arrays of different sections, where each section functions as an independent sensor. Sensors are coated with special biofilms that are specifically attracting targeted proteins. Consequently, multiple different proteins in the biosamples could be captured at different places on the platform and monitored simultaneously.

Light intensity is carefully screened.
The diode then allows for detection of the trapped proteins almost immediately. The light shines on the platform, passes through the nano-openings and its properties are recorded onto the CMOS chip. Since light going through the nanoscaled holes changes its properties depending on the presence of biomolecules, it is possible to easily deduce the number of particles trapped on the sensors.

Laboratories normally observe the difference between the original wavelength and the resulting one, but this requires using bulky spectrometers. Hatice Altug’s ingenuity consists in choosing to ignore the light’s wavelength, or spectrum, and focus on changes in the light’s intensity instead. This method is possible by tuning into the "surface plasmonic resonance" – the collective oscillation of electrons when in contact with light. And this oscillation is very different depending on the presence or absence of a particular protein. Then, the CMOS chip only needs to record the intensity of the oscillation.

A highly adaptable device
The size, price and efficiency of this new multi-analyze device make it a highly promising invention for a multiplicity of uses. "Recent studies have shown that certain illness like cancer or Alzheimer’s are better diagnosed and false positive results avoided when several parameters can be analyzed at once," says Hatice Altug. "Moreover, it is possible to remove the substrate and then replace it with another one, allowing to be adapted for a wide range of biomedical and environmental research requiring monitoring of biomolecules, chemicals and bioparticles." The research team foresees collaborating with local hospitals in the near future to find the best way to use this new technology. 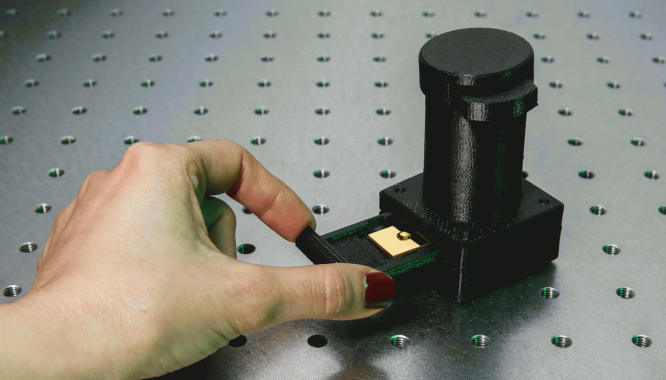