Researchers at EPFL have come up with a folding, reconfigurable robot that is capable of crawling and jumping. Modelled on the inchworm, it represents a new paradigm in robotics.

The word robot generally conjures up images of a rigid structure and electronic motors. In Jamie Paik’s Reconfigurable Robotics Laboratory, however, the word takes on a whole new meaning. Researchers have thrown convention out the window by creating robots patterned on origami: flat, ultra-light and foldable.

The most recent of these origami robots or "robogamis", Tribot, has been unveiled at the International Conference on Intelligent Robots and Systems (IROS). Tribot’s gait pattern is modelled after inchworms, but what makes it unique is  its gait mode: it can simultaneously switch between crawling and jumping, which means it can jump over obstacles and then resume moving forward. Tribot is two centimetres tall, weighs 4 grams and has a T-shaped structure with three legs. "This unusual robot can jump up to seven times its height, and it does not need to be reset between jumps," said Paik.

Intelligent motors actuated with heat
Creating a robot as light as a Swiss 20-centime coin was not easy for the team, which had to overcome several technical challenges. They could not use conventional motors, which are too heavy and bulky. All movement comes from a special kind of actuator and intelligent springs, which are made from shape memory alloy (SMA).

Shape memory alloy – in this case Titanium and Nickel – is capable of "remembering" its initial shape, even after it has been deformed. After deformation, it is possible to make it return to its basic shape by heating it at a certain temperature. Researchers used this principle to generate movement in their ultra light robot. They built actuators made of shape memory alloys to allow locomotion in many directions. In short, movement is induced by thermally activating different parts of the robot.

"We gave the robot numerous actuators, each of which is insulated from the others," said Zhenishbek Zhakypov, who co-authored the article. "By activating the actuators successively, the robot begins to crawl. The jumping mode depends on springs that are also made out of SMA."

There are two ways to heat the actuators: by sending an electric current into the robot using wires, or with customized wireless micro-heaters.

Very easy to build
Tribot’s sandwich-like structure could easily be produced on a mass scale. Several two-dimensional layers need to be assembled to create the three-legged robot. "Just like ready-to-assemble furniture, these robots could be shipped in flat layers that could then be easily assembled," said Paik. In their article, the researchers explain how Tribot can also be created with 3D printing, an extremely fast process.

Applications still to be determined
Unusual by any measure, Tribot – like the other robogamis – creates new perspectives in the field of robotics. Since it can switch modes of locomotion and adapt to the environment by reconfiguration, it could be used to move across rough terrain, for example.

For now, the researchers are continuing the work on their robogamis to give them additional sensors – such as accelerometers, and micro cameras – and having them interact with each other.

Publication on the other robogami: A. Firouzeh and J. Paik. Robogami: A Fully Integrated Low-Profile Robotic Origami, in Journal Of Mechanisms And Robotics-Transactions Of The ASME, vol. 7, num. 2, 2015. 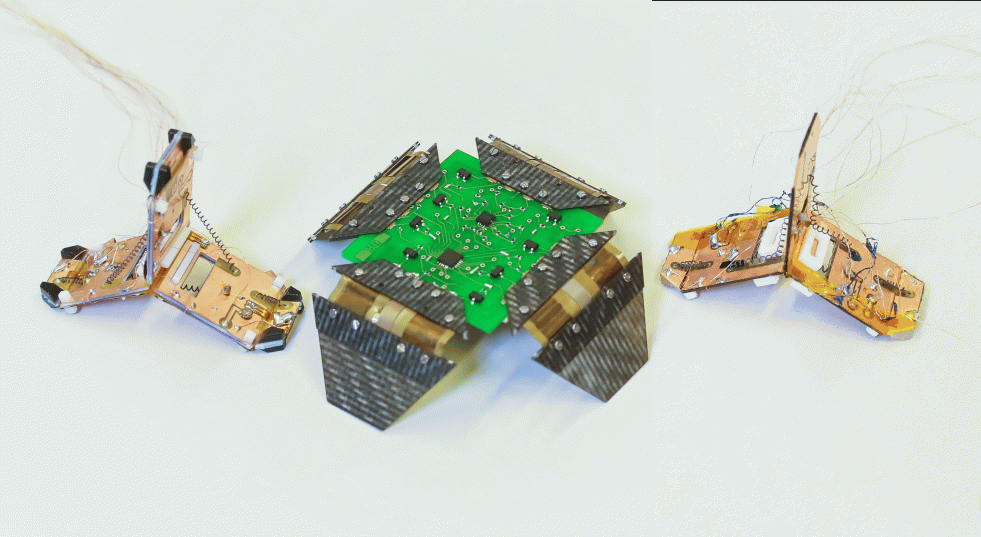