EPFL researchers have found that water molecules are 10,000 times more responsive to ions than previously thought.

Water is simple and complex at the same time. A single water molecule (H2O) is made up of only 3 atoms. Yet the collective behavior of water molecules is unique and continues to amaze us. Water molecules are linked together by hydrogen bonds that break and form several thousands of billions of times per second. These bonds provide water with unique and unusual properties. Living organisms are  for 60% composed of salty water. Deciphering the interactions between water and ions is thus fundamentally important for understanding life.

Not 100 but 1,000,000 molecules are influenced
Researchers at EPFL’s Laboratory for fundamental BioPhotonics, led by Sylvie Roke, have probed the influence of ions on the structure of water with unprecedentedly sensitive measurements. According to their multi-scale analyses, a single ion has a a small but measurable influence on millions of water molecules, that is 10,000 times more than previously thought. In an article appearing in Science Advances, they explain how a single ion can "twist" the bonds of several million water molecules over a distance exceeding 20 nanometers causing the liquid to become "stiffer". "Until now it was not possible to see ions influence more than a hundred molecules (a distance of around 1 nm). Our measurements show that water is much more responsive to ions than we thought," said Roke, who was also surprised by this result.

Water molecules line up around the ions
Water molecules are made up of one negatively charged oxygen atom and two positively charged hydrogen atoms. The Mickey Mouse-shaped molecule therefore does not have the same charge at its center as at its extremities. When an ion, which is an electrically charged atom, comes into contact with water, the network of hydrogen bonds is perturbed. The perturbation spreads over millions of surrounding molecules, causing water molecules to align preferentially in a specific direction. This can be thought of as water molecules "stiffening their network" between the various ions.

From atomistic to macroscopic length scales
Water’s behavior was tested with three different approaches: ultrafast optical measurements, which revealed the arrangement of molecules on the nanometric scale; a computer simulation on the atomic scale; and measurement of the water’s surface structure and tension, which was done at the macroscopic level. "For the last method, we simply dipped a thin metal plate into the water and pulled gently using a tensiometer to determine the water’s resistance to pulling," said Roke. "We observed that the presence of a few ions makes it easier to pull the plate out, that is, ions reduce the surface resistance of water. This strange effect had already been observed in 1941, but it remained controversial and unexplained until now. Through our multiscale analysis we were able to link it to ion-induced stiffening of the bulk hydrogen bond network: a stiffer bulk results in a comparatively more flexible surface."

Testing different salts and different "waters"
The researchers carried out the same experiment with 21 different salts: they all affected water in the same way. Then they studied the effect of ions on heavy water (D2O), whose hydrogen atoms are heavy isotopes (with an additional neutron in the nucleus). This liquid is almost indistinguishable from normal water. But here the properties are very different. To perturb the heavy water in the same way, it required a concentration of ions six times higher. Further evidence of the uniqueness of water.

No link with water memory or homeopathy
Roke and her team are aware that it might be tempting to link these stunning results to all sorts of controversial beliefs about water. They are however careful to distance themselves from any far-fetched interpretation. "Our research has nothing to do with water memory or homeopathy," she said. "We collect scientific data, which are all verifiable. "To prove the role of water in homeopathy, another million-billion-billion water molecules would have to be affected to even come close, and even then we are not certain."

The new discovery about the behavior of water will be useful in fundamental research, and in other areas too. The interaction between water and ions is omnipresent in biological processes related to enzymes, ion channels and protein folding. Every new piece of knowledge gives greater insight into how life works. 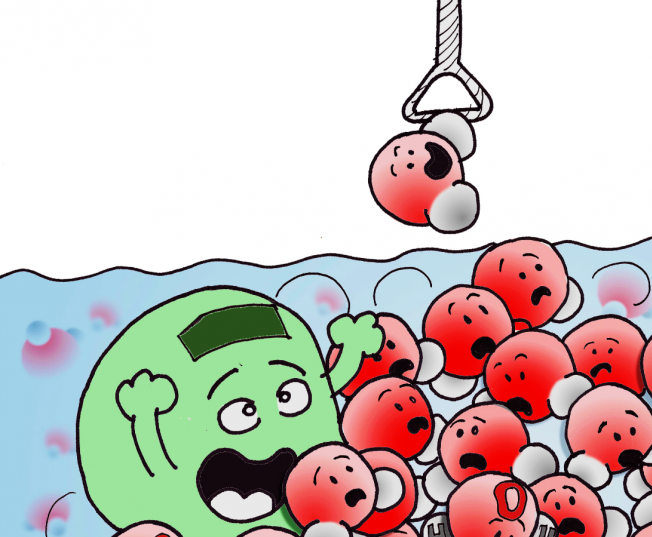