Close to 570 people came to the Rolex Learning Center for the 14th annual meeting of the Center of MicroNanoTechnology (CMi), a complex of world-class clean rooms. Throughout the day, scientists and manufacturers presented the devices they had created using CMI’s high-tech equipment to a captivated audience.

Nanowire capable of absorbing great quantities of light, new-generation MEMS and flexible electrodes are just some of the things that researchers and businesses have developed at CMi and that were presented last month at the center’s 14th annual meeting.

Situated at the heart of the EPFL campus, CMi is a complex of clean rooms and the only one of its kind in Switzerland. The center is dedicated to training, research and technology transfer. Its key strength is that it operates on the same "user labs" principle as universities such as Stanford, Berkeley and MIT. This means that users, which include PhD students, professors and partner companies, can have direct access to the center’s equipment once they have received training and paid a fee. Users are given technical support and coached at all times by the center’s experts. They can then use the center to develop extremely high-tech devices and acquire extensive know-how of manufacturing processes at the same time. "In this way, CMi contributes to the training of highly skilled PhD students," states Philippe Flückiger (pictured below), CMi’s Director of Operations.

STI: the center’s biggest client
The concept is greatly appreciated by its users, who are constantly growing in number. 85 labs and companies used the center in 2012, with 360 different users, a rise of 17% compared with 2011. And this trend is likely to continue. "We expect an annual rise of 10% over the next five year," adds Philippe Flückiger. The School of Engineering (STI) alone accounts for more than 58% of users. CMi’s presence on campus is a major advantage for the STI, and this is regularly used as a selling point when looking to hire new professors.

The diverse range of procedures that can be carried out at CMi and its ability to adapt to the changing needs of researchers mean that there is practically no other place like it in the world. Researchers can really push the boundaries of physics and technology and develop innovative devices that often make it into the major scientific journals. (See examples at end.)

The challenge of flexible electrodes
At CMi, most micro- and nano-structures are created by depositing thin layers on substrates and by using photolithography and etching, but processes do vary.
The different research projects presented at the annual meeting demonstrate just how diverse the equipment at the center is. The equipment can be used, for instance, to produce flexible but resistant electrodes that can be placed on the brainstem or spinal cord of patients with the aim of using electrical stimulation to recover certain faculties related to hearing and mobility. "It’s extremely difficult to produce materials that are biocompatible, electrically active and elastic, so we’re studying various possibilities," says Ivan Mitev from the Laboratory for Soft Bioelectronic Interfaces.
Herbert Shea from the Microsystems for Space Technologies Laboratory is also creating electrodes at CMi, combining them with an elastomer surface. The resulting "muscle on a chip" is capable of reproducing the pressure and mechanical stress that muscles usually exert on cells, which is an excellent study tool for biologists.

From photovoltaics to frequency combs
When it comes to playing with light, micro- and nano-manufacturing processes are of utmost importance. The team of Anna Fontcuberta I Morral, for example, uses CMi every day to create nanowires capable of absorbing great quantities of light, and they have even managed to outperform traditional solar cells.
It was also at CMi that the K-lab team produced microresonators, coupled with fiber optic cable, capable of producing frequency combs. Usually generated by large devices, these combs can be very useful in metrology and for measuring frequencies.
Other researchers who have used the center include Davide Balma from the Ceramics Laboratory, who developed extremely rapid piezoelectric MEMs that consume little electricity.

Technology transfer and industry
In addition to its academic role, CMi is also a platform for EPFL startups, which often use the center to develop their first prototypes. This was the case for Aleva, which focuses on developing electrodes for brain stimulation. "We produced them entirely at CMi; the equipment there is extraordinary," says Aleva’s André Mercanzini.
External companies are also among CMi’s clients, making up 8.1% of users. Being able to access equipment that they don’t have themselves is a real advantage. In addition, employees are often sent to the center to familiarize themselves with certain manufacturing processes.

So CMi has a promising future ahead. And developments and improvements are set to continue. "Our aim is for CMi to become the world’s leading platform for micro- and nano-manufacturing," states Philippe Flückiger.
In the coming years, CMi will continue to acquire high-tech equipment in order to extend its offering based on the needs of its users. In 2013, for instance, several pieces of equipment will be bought to replace old ones. "The success of CMi depends on its users," explains Philippe Renaud, CMi’s Scientific Director. "We are particularly sensitive to their current and future needs for research and training at EPFL."

A brief history of CMi

Selection of articles about devices developed within CMi 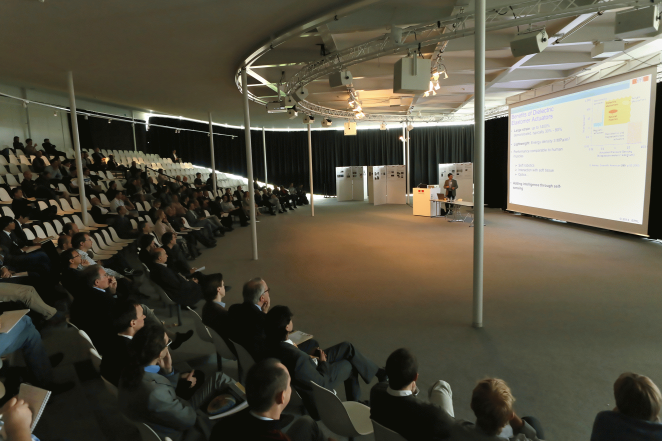