In electronic devices, chip performance is limited by electron speed and by overheating caused by the electric current during intensive use. To overcome this, a number of research projects seek to combine both electronic and optical components on one chip or to produce all-optical chips. The ultimate aim is to make the chips faster, reduce overheating and use less energy. But to achieve all that, they will have to incorporate several nonlinear optical functions without undermining the chips’ performance.

Researchers at EPFL’s Photonic Systems Laboratory, headed by Camille Brès, working with the Laboratory of Photonics and Quantum Measurements, run by Tobias Kippenberg, were able to integrate new optical functions into a single chip that is compatible with CMOS fabrication. They did all that using light – in other words, without adding electrodes. The research has been published in Nature Communications. Potential applications include data detection and processing for fiber optics, stabilizing frequency combs and on-chip quantum optics.

Light is an interesting alternative to an electric current for some applications in both telecommunications and sensing and spectroscopy. To send and receive data, and to analyze chemical compounds, light must be controlled, converted and used in a guiding material with nonlinear properties. Indeed, a large number of optical functions require materials that produce nonlinear – or second-order – effects. When they come into contact with light, these materials can, for example, double the energy, and thus the frequency, of photons. This process, which is called second harmonic generation, is critical for many applications.

The only problem lies with silicon and its compounds, which are used in most conventional, CMOS-compatible electronic chips. Silicon does not exhibit such second order nonlinearity due to its centro-symmetry, while materials that do are difficult to integrate onto the chips.

Camille Brès and her team found a way around this obstacle. They were able to induce the desired effect of nonlinearity in silicon-nitride-based waveguides, making the second harmonic up to 1,000 times more efficient. “We used a laser to excite electronic transitions in the silicon nitride. We basically broke the material’s symmetry,” says Brès. “Once the laser is injected, the modification remains inside the waveguide, which therefore contains the nonlinearity that we are looking for. We can also change the periodicity of this nonlinearity at will, so that second harmonic generation can take place over a wide range of frequencies without us having to modify the chip itself,” adds Davide Grassani, the article’s co-author.

Up to now, it was only possible to break the atoms’ symmetry by adding electrodes to the waveguide or by stressing it, which makes the chips harder to produce and leaves the waveguide permanently altered. The researchers’ new technique is simple, resulting in a highly adaptable waveguide. Another distinct advantage of this technique is the use of silicon nitride, a material that is commonly used in the electronics industry and that is also compatible with current CMOS technologies.

*The chips have been manufactured at CMi 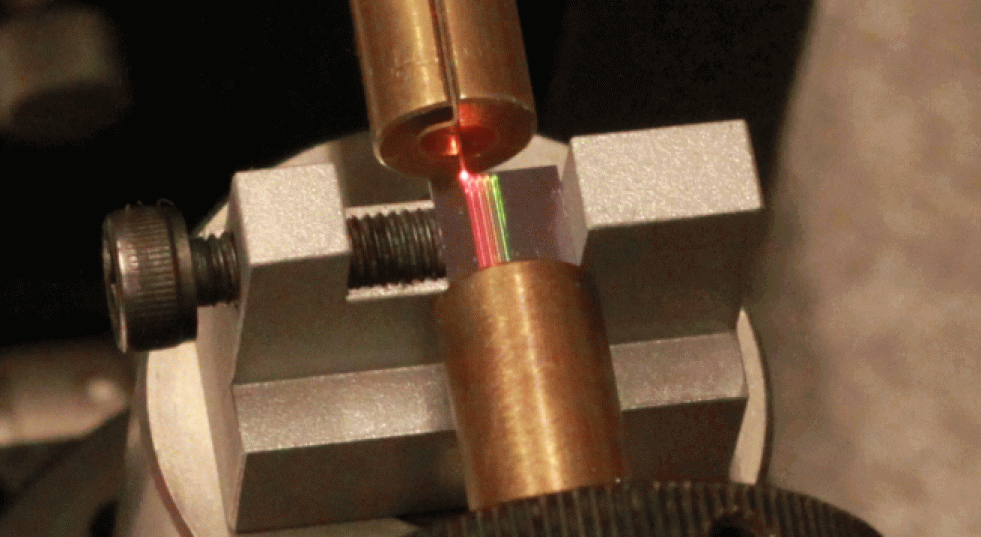