At the prestigious annual TED Conference, EPFL alumnus Riccardo Sabatini showed that it is possible to reconstruct a human face from a DNA sequence. The computational approach behind this feat is also used at EPFL in the field of materials science.

It is now possible to determine a person’s height, age, skin, eye color and even what their face looks like – all from a DNA sequence. Riccardo Sabatini, a former postdoc in Nicola Marzari’s Laboratory of Theory and Simulation of Materials (THEOS) at EPFL, demonstrated the reconstruction as part of the TED2016 Conference in Vancouver. TED Conferences have included high-profile speakers such as Bill Gates, Al Gore, and Bill Clinton.

Riccardo Sabatini currently works for Human Longevity Inc., a Silicon Valley company founded by Craig Venter who achieved one of the first sequencings of the human genome (using his own). Sabatini addressed an audience containing some of the world’s most influential figures. In the d

emonstration he compared the faces of real people to simulations obtained from a sequence of their DNA. While explaining that there are many limitations to the model, the overwhelming resemblance of the reconstructions was enough to impress the audience.

"Cracking the code of life"
Behind these results are extraordinary methods of analysis and simulation, a branch of science commonly called machine learning. The scientists had to collect an enormous amount of data of 3d photographs and DNA, and to carry out sequencing on a large scale. Human Longevity sequences thousands of genomes every month, but how does one glean useful information from such an astronomical amount of data? The answer is in a framework called machine learning, a field of statistical science used to find signal in very complex and heterogeneous sets of data in a semi-automatic way, especially powerful when mechanistic models are not known or feasible to solve.

The results presented by Sabatini have broad applications. Could the method be used in police investigations or to reconstruct the appearance of key historical figures? For now, Human Longevity plans to use this knowledge to address health issues. The point is not to simply predict people’s physical characteristics, but rather to predict what diseases they are likely to develop and how to best treat them in a personalized manner. At EPFL, the same kind of approach is not used to reconstruct faces but to predict the performance of materials, as well as to virtually create new types. While in Switzerland, Riccardo Sabatini has been one of the developers of AiiDA, the materials’ informatics platform that supports the data efforts of the MARVEL NCCR.

Laboratory of theory and simulation of materials 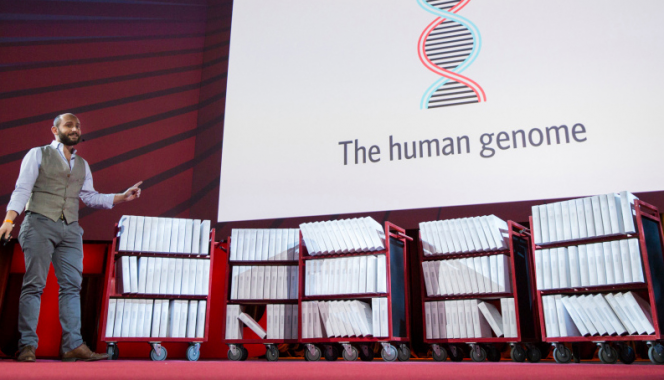