Five robots developed by EPFL students faced off in the school’s traditional robot competition. Their mission: to collect recyclable plastic bottles while dodging obstacles, and then deliver them to a collection point. The event, in its fifth year, was won by "Baby", a robot equipped with a cannon to shoot the bottles into the air.

EPFL’s fifth annual robot competition drew a sizeable crowd to the Salle Polyvalente this past week. Who were the stars of the show? Five autonomous robots, developed by EPFL students, which took turns strutting their stuff in the arena. Their mission was to collect recyclable plastic bottles scattered around the floor and deliver them to a collection point, while navigating around various obstacles. Each bottle represented a certain number of points depending on its position in the arena.

The robot named Baby won with pizzazz: it shot the bottles directly at the collection point with its integrated cannon while AC/DC music pumped in the background. Baby racked up 100 points, using its four sensors – three at ground level and one on top – to tell the bottles from the obstacles. Its approach is simple. When it encounters a bottle, its adhesive mechanical arm swings down, picks it up and drops it into its bin. Then, it shoots the bottles through the air towards the collection point with a cannon. "The robot has an electronic compass to aim its cannon," said Chiara Ercolani, one of Baby’s designers. "And the power of the cannon is adjusted for the distance between the robot and the collection point." Antoine Tardy added: "We thought it would be a waste of time for the robot to go back and forth to the collection point. And the idea of a cannon was really cool."

Once it had won, Baby had to face off against last year’s winner, Conchitor. That robot, with its caterpillar tracks, collected 97.5 points. Not bad, but not enough to beat Baby.

The award for the "coolest" robot went to Système D, which changed color depending on whether its bin was full or empty. This robot, although nimble in collecting bottles, ran into problems when it came to unloading its cargo.

Managing a budget and dealing with the workshops
Professor Auke Ijspeert, the event organizer, was very pleased with this year’s entries. "The robots are developed as part of the students’ semester project," he said. "The students, who are all from the School of Engineering, work on them for a day and a half per week over the course of four months, which is not a lot of time. Every year the robots get sturdier."

It is a demanding exercise, the ultimate goal of which is educational. "The participants have to manage a budget and learn how to share the work in designing the mechanics, electronics, and software of the robots," said Ijspeert. "They also learn how to work with the School of Engineering’s workshops in order to get the parts they need." Halfway through, the codes from past years’ robots are provided to the participants. But the workload remains heavy. And at the end of the competition, everyone is exhausted. "I left my sleeping bag in the room – now I can take it home," said Tardy. "And I’m looking forward to eating something other than chips and snacks." 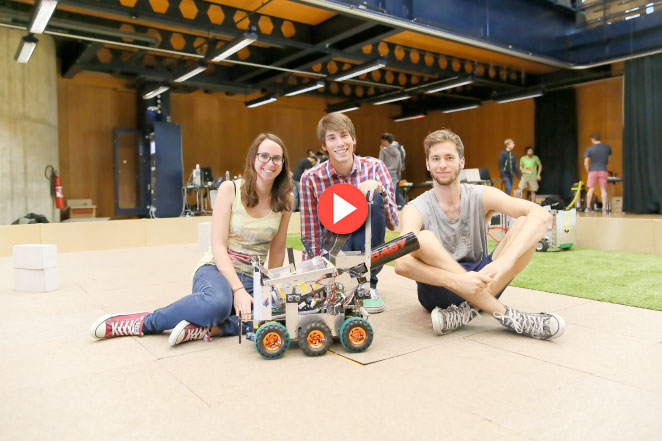