Photonics is the study of light in the broadest sense of the word, and it plays a major role at EPFL, which has a PhD program in photonics and spins off one or two photonics-related startups per year on average. Photonics-based techniques and approaches help enable scientists to design lasers, build high-performance solar cells and develop tomorrow’s telecommunications, to name just a few applications currently moving ahead in labs at EPFL.

What do solar cells, laser surgery and HD TV have in common? The answer is photonics: all three relate in some way to this fast-growing field of research. Photonics, or "light science," goes hand in hand with many new technologies. It underlies any technique for emitting, detecting, modulating, transmitting, amplifying and converting optical signals.

Close to 8,500 jobs in Switzerland
Here in Switzerland close to 8,500 people are working in photonics. Among them, 20-25% hold a university degree (Bachelor, Masters or PhD). The field generates CHF 4.1 billion in revenue per year. Of that amount, CHF 1.5 billion relates to machines for solar cell production that are manufactured by a few large Swiss companies. The remainder is generated by small businesses, whose photonics-related activities are far more diverse.

Only two Swiss schools offer Masters studies in photonics: one is the University of Applied Sciences in Buchs (St. Gallen Canton), which has a Masters in optics. The other is the EPFL, with its "optics branch" in the Masters in microtechnology and its photonics PhD. At postgraduate level, the number of photonics doctoral students at EPFL is steadily growing, with 87 PhDs in 2012 as against 7 in 2003. EPFL’s Life Sciences Faculty also has a technical platform for bio-imaging and optical imaging (the PTBIOP), which makes a wide range of optical microscopes available to scientists.

Overall, it’s clear that photonics is a field on the rise. As Christophe Moser of the Laboratory of Applied Photonics Devices notes, "The SwissPhotonics Counsel, which groups representatives from both academics and industry, awarded two merit scholarships for students in the optics branch of our Masters program. That just goes to show how much interest there is in the private sector for well-trained photonics engineers."

This private-sector interest isn’t surprising, given that EPFL spins off one or two photonics-related startups per year on average. Some of these firms have ended up becoming global leaders in their fields. Omnisens, for example, which was founded in 1999, is a global reference in optical monitoring, while Lyncée tec (founded 2003) leads the field in digital optical microscopy and LESS (founded 2012) is revolutionizing screen lighting.

Light: both a wave and a particle
Photonics is based on the fact that light exists as both waves and particles, i.e., packets of energy, or photons. The field of photonics came into its own in the 1960s, with the advent of laser technologies. Optics gradually replaced electronics in many fields, starting with specific areas like telecommunications but expanding its reach over time. Today, practically every scientific discipline relies on optics.

Almost 30 different EPFL labs employ photonics, with the labs divided between the Engineering Faculty (STI) and the School of Basic Sciences (SB). The STI labs tend to deal with applied photonics and real-life applications, while the SB takes more of a fundamental research approach. The fields concerned include metrology, optical communications, molecular detection and more – in short, photonics is everywhere. It is used for work on all scales and across the entire light spectrum.

"Frankly, there are very few fields that don’t involve photonics in some way," says Benoît Deveaud-Plédran, head of NCCR Quantum Photonics, "because anything involving a laser or an optical microscope is based on photonics, to take just two examples." Olivier Martin, director of the photonics PhD program, adds, "Photonics isn’t an end in itself, but rather an enabling technology that you run into both in fundamental research and in concrete applications." It’s therefore impossible to cover all of the work being done at STI that relates to this ubiquitous field. However, several examples are detailed below. 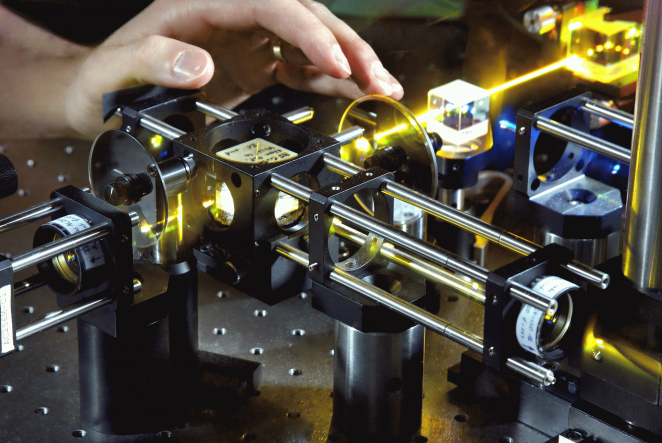