Three new professors joined the School of Engineering (STI) at the beginning of 2014. They will carry out their research at the institutes of Electrical Engineering, Material Sciences and Mechanical Engineering.

At the beginning of the year, Tobias Schneider (GE), Drazen Dujic (Y) and Roland Logé (BE) became members of the School of Engineering. They will provide expertise in the fields of fluid and solid physics, high power electronics, and material simulation. With these new recruitments, the School of Engineering reiterates its desire to participate in the race for excellence being led by EPFL.

«When a disturbance generates turbulence in a fluid, sophisticated patterns of turbulence invade quiescent flow. This is a well-known phenomenon that we haven’t understood yet»

Tobias Schneider left a position at the famous Max-Planck Society to join EPFL. On the 1st of January 2014, he was appointed Tenure Track Assistant Professor (PATT) at the Institute of Mechanical Engineering. A physicist by training, he worked at Bell Laboratories in New Jersey, Marburg University, Germany and Harvard University (US).

His goal is to understand how seemingly simple physical mechanisms give rise to very complex behaviours, such as intricate structures or shapes. He focuses mainly on patterns emerging in fluid flows that have turned turbulent. When perturbations occur in a quiescently flowing fluid, turbulence often arises in localized patches. It spreads like a bushfire and leads to evolving laminar-turbulent patterns. "We have known the equations describing fluid flows for more than a century, but we still don’t fully understand how those patterns emerge," the professor says. "By combining mathematical dynamical systems theory, large-scale computer simulations and experimental investigations, we have however started to solve the puzzle. We have also developed our own simulation software."

Being able to understand these phenomena would be a major step. A better knowledge of these mechanisms would indeed provide new ways to control flows, and help to find better solutions in several applications.

Overall, Tobias Schneider’s research is at the intersection of applied mathematics, classical physics and engineering. It is focussed on fluid mechanics, but the quest is reaching beyond fluids. The scientist also seeks to understand what is going on when thin elastic object buckle, for example. He also investigates how intricate three-dimensional coral-like shapes virtually indistinguishable from biological structures emerge from chemical reaction in a solution. "We hope to understand the construction mechanisms that may also be relevant for biological growths"

Tobias Schneider sees EPFL as a unique and extraordinary place, where the quality of research has been demonstrated many times over. "This University offers the same benefits as big universities in the US do, with its tenure track system in particular, but combines it with the advantages of the European idea. Internal funding allow to explore creative, new, high-risk research projects, that are not yet on the agenda of funding agencies. EPFL is young, dynamic and capable of evolving rapidly. I believe that despite being so young, it can join the best research places in the world. It’s a privilege to be part and contribute to the dynamic evolution of EPFL", the scientist says.

Drazen Dujic will start on the 1st of February 2014 at the Institute of Electrical Engineering as Tenure Track Assistant Professor (PATT).

He comes from industry, more precisely from ABB (CH), and is investigating new methods in the field of high power electronic conversion for emerging applications. The new professor is interested into development of new, power electronics based technologies for electrical energy generation, conversion and storage, e.g. integration of large scale renewable sources (solar, hydro and wind energy) into the future electrical grid.

"Nuclear power plants cover around 40% of Switzerland’s needs in terms of electricity, and they are planned for shutdown by 2034. Viable, efficient and cost effective solutions must be found, and power electronics will play an important role in this process."

After obtaining his initial degrees at the University of Novi Sad in Serbia, Drazen Dujic received his PhD degree from Liverpool John Moores University in Great Britain (working with Prof. Emil Levi). He then joined ABB Corporate Research (CH) where he was Principal Scientist and deputy group leader in power electronics group, working on future power electronics technologies.
Several years later, he moved to ABB Medium Voltage Drives (CH) as R&D Platform Manager, where his function was more business-oriented, despite still being very technical.

He is a recognized expert in high power electronics with a global vision of the problems occurring inside electrical grids, traction applications and industrial high performance variable speed drives. "Nuclear power plants cover around 40% of Switzerland’s needs in terms of electricity, and they are planned for shutdown by 2034. Viable, efficient and cost effective solutions must be found, and power electronics will play an important role along the process." says the scientist. "A lot of questions remain, concerning the integration of renewable energies in the grid, and also how that grid should look. We need to protect the system and keep it stable. In particular, a lot of attention must be paid to the ever increasing penetration of power converters," he comments.

Some professors at EPFL are already working on smart grids, like Mario Paolone. But Drazen Dujic’s approach differs from theirs. The scientist is interested in "active grids", enabled and penetrated by power electronics converters working as "actuators", inside, outside or nearby the smart grid. He is trying to find the best ways of converting energy for each particular situation. "While the properties of power electronics converters can be mathematically described, their influence is often neglected in power system studies. Yet, as their number grows with the proliferation of renewable energy sources that we will have to integrate into the grid, neglecting them is no longer an option."

In practice, Drazen Dujic combines Mathematics, Physics and Materials Science to optimally match applications needs and capabilities of power electronics technologies. This involves different types of semiconductors (Si, SiC, GaN), magnetic materials and/or novel converter topologies and control methods. His aim is also to understand how the system really works in all aspects. "This kind of study has already attracted the interest of industry because no perfect solutions exist right now to integrate renewables and keep this complex power network stable, without disconnections or blackouts."

The scientist has known EPFL for many years. "When I was working at ABB, I often came to this university to supervise students and to pay a visit to Prof. Alfred Rufer, with whom I was collaborating back then. Before applying to this position, I already had a good insight into atmosphere of this fantastic place", he relates. "I’m impressed by the university organisation, as well as by the freedom given to researchers. My hope is to develop strong collaboration with the excellent scientists of this institution."

"In the fields of aeronautic, automotive, and nuclear industry, the quality of metallic parts is essential."

A native of Belgium, Roland Logé was Director of Research at the Centre National de Recherche Scientifique (CNRS) in France before joining STI. From the 1st of March 2014, he will work as Associate Professor and head the new PX Chair dedicated to Metallurgy. Although he will be attached to the Institute of Materials Sciences his laboratory, the Laboratory of Thermomechanical Metallurgy (LMTM) – PX Group Chair, will be located in the new Microcity building in Neuchâtel. His research focuses on transformation processes for different kinds of metal.

Roland Logé’s training was divided between Europe and the United States. He obtained his certificates at the Louvain-la-Neuve University (BE), and received a Master of Science at Santa Barabara University in California (US). He then continued on a PhD at the Ecole des Mines de Paris (FR), in the Center of Materials Forming (CEMEF) located in Sophia Antipolis (FR). Back in the United States, he carried out a postdoc at Cornell University. Roland Logé returned afterwards to the Ecole des Mines as a CNRS researcher, and finally became Director of Research in 2013. A new challenge is now beginning at the School of Engineering.

Roland Logé’s activity will consist in performing thermomechanical tests, characterization and modelling, better to understand and predict the final state of the material. His research involves both experimental and numerical aspects. "In the science of crystalline materials, the ‘grain’ represents the reference unit and the grains assembly features will largely dictate the properties of the different alloys. The more a material is heated, the more the grain size will increase, generally leading to a decrease of the mechanical properties. What we seek to know is whether there is a temperature at which the grain structure can be stabilized", the scientist explains. "In order to answer this question, we try get a better understanding of the phenomena at the interface between two grains, and this can involve collaborations with people modelling them at very low scales, up to the atomistic level. Knowing the interface properties help understanding grain growth behaviors".

Roland Logé intends to establish strong relationships with local industry without neglecting the fundamental aspect of his research. "Manufacturers always come up with important questions. It is essential to have regular contacts with them ", the Professor comments.

"We will perform tests on small samples within our laboratory, in order to mimic what the industry could do at a larger scale. It will then become possible to provide advice to industry, telling them if there is an interest in investing in new manufacturing machines, and/or suggesting optimal working conditions for obtaining specific shapes and properties", Roland Loge summarizes.

"EPFL is famous around the world"
Roland Logé is looking forward to beginning as an Associate Professor in Switzerland, where he thinks the research is very much valued. "EPFL is really renown worldwide, and the funding system through all kinds of programs like CTIs, FNS, etc., is far better than in France. It is great to work in a place like that".
——- 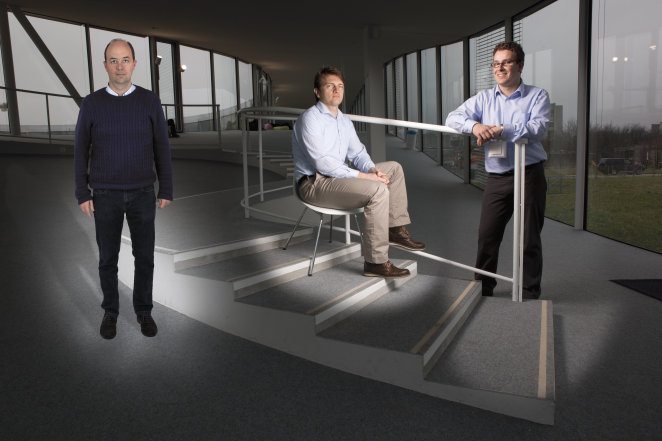