Masters students from many of our laboratories have developed innovative and unusual devices for their semester projects, from the creation of robots that can play table football (foosball) to the construction of futuristic planes.

At first glance, the foosball table in the middle of the Automatic Control Laboratory looks perfectly normal. However, looks can be deceiving. In defense, one of the levers has a mechanical arm capable of propelling the ball into the opposing goal at a speed of 6 meters per second. "This is already enough to beat the average player," said the researcher Christophe Salzmann, who heads the project. And this is only the beginning. The robot should eventually prove to be more accurate, faster, and more strategic than any human player.

A high-speed camera to detect the ball
Made from start to finish by several student groups, the robotic arm depends on two computers: one to control the mechanical movement of the arm and the other to provide information about the position of the ball. In order to position itself correctly, the robot must have a clear idea of the location of the ball in real time.

So students replaced the bottom of the foosball table with a transparent material. They then placed a high-speed camera on the ground to film the game board. "Through image processing algorithms, we can analyze the movement of the ball in real time. This information is transmitted to the computer that controls the movement and positioning of the arm," says masters student Martin Savary, who participated in the project.

"We still have some problems coordinating the two processes, but we are going to work on it," added Cyril Picard, another student working on the robot. "It will eventually condense into a single computer."

Challenges of an industrial project
For now, the robot cannot perform complex moves, but its kicking power is already formidable. Christophe Salzmann welcomes the results. "This is a very good exercise for the students. They control the materials, assemble the robot, program it and developed the algorithms. The work is comparable to any industrial project. It must be accomplished by working in a group, and sometimes," he smiles, "they end up banging their heads against the wall."

The goal: robots playing against each other
The robot will continue to be developed by other groups of students until it works perfectly. "Potentially, the computer can simultaneously analyze many more parameters than a human and process information faster. It could simultaneously analyze the location of all players and the exact trajectory of the ball after it ricocheted off the edges. All that remains is to develop a strategy," explains Christophe Salzmann. The researcher allows himself to dream: "Ultimately, we could imagine organizing games between opposing robots."

A flexible Robotic Wing
When soaring through the air, birds are constantly changing the position and shape of their wings to adapt their flying properties. Traditional robots, being rigid and limited in their range of motion, struggle to mimic them and replicate their technique of flying.

However, the flexible robots of the Reconfigurable Robotic Laboratory can mimic birds more effectively. Materials student Thomas Chenal worked on the construction of a wing that is both rigid and flexible.

The major advantage of this new type of wing is that it can adapt to its environment during flight, without resorting to electric actuators, as would a standard robot.

Here, the actuators are replaced by shape-memory alloys. That is to say, these intelligent and flexible materials are particularly constructed to store an initial form and, when subjected to a given temperature, return to it after deformation.

Localized heating of the wing suffices to obtain the desired shape. When the structure cools down, it resolidifies. "We use embedded generators to heat the parts of the wing that we want to move," says Thomas Chenal.

At a length of 15 cm, the prototype is already able to bend in several different directions. However, that is not enough for it to fly. "The form is not yet fully adapted. Control of the folding wing, in particular, has to be improved."

The project does not stop there. Thomas Chenal will continue to work on it as his master’s thesis project at Purdue University (Indiana).

A lighter aircraft via an unusual shape
In the Laboratory of Applied Mechanics and Reliability Analysis, Bachelor’s students have created a new type of drone. Although the structure is much lighter than conventional designs, it is just as strong..

The trick used by students consists of distributing the load over the entire device, instead of focusing it in the center, as with conventional models. "The structure of our drone is pretty special. It has a kind of truss between the two wings, which enables better load distribution and improved structural performance," explains Olivier Cornes, a student participating in the project.

With a wingspan of 4 meters for a total weight of 5 kilos, the aircraft, made from Sagex and carbon fibers, has two propellers and several small engines. Remotely controlled from the ground, it successfully completed its first flight in early summer. (See video.)

"We now know the aircraft is airworthy. The next step is to conduct a series of flight tests to assess its performance, and develop controllers to
increase its maneuverability…" 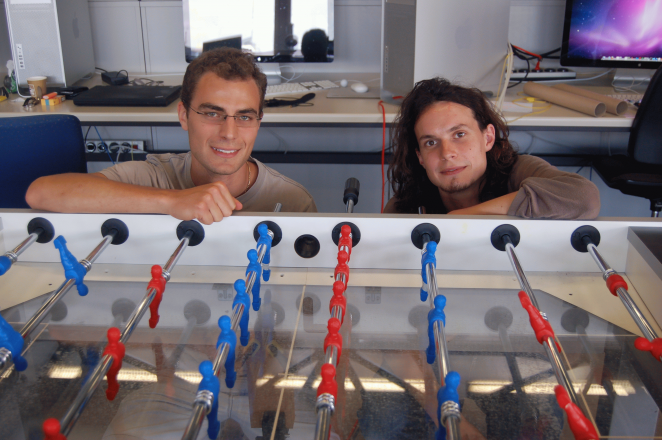