Starting in 2015, the new Mechanics building will house interdisciplinary laboratories, seminar rooms and practical workspaces. It will also serve as a testing ground for EPFL scientists who plan both to study the movement of people inside the premises and to optimize the energy management of the new facility.

Originally conceived as the home of the  EPFL’s Center for Neuroprosthetics (CNP), the Mechanics Building, which is set to be unveiled  right across from the Rolex Learning Center, will host the laboratories of the School of Engineering (STI) that are active in Microengineering (IMT), Mechanics (ME) and Bioengineering (IBI), as of 2015. It will also house practical work rooms for students, as well as many social and professional spaces.

Designed by French architect Dominique Perrault – to whom we are indebted for the National Library of France in Paris – the building spreads out over four floors and covers 8,000 square meters. "Following the departure of the CNP for Campus Biotech in Geneva, the building was redesigned as a multi-discplinary location, supporting the creation of synergies," says Patrick Pugeaud, from the infrastructure services of STI. Research units were spread out according to their scientific interests.

Zones for meeting, transit and exhibition
Thus, on the ground floor one finds mechanical engineering research units and an auditorium, as well as a

cafeteria. The first floor will include the Chairs in Robotics and in Mechanics, a robotics assembly workshop and study rooms in an open space. For practical work in electronics and mechanics, students should go to the second floor, which also hosts groups focusing on mechanical simulation and simulation of materials. Finally, the third floor – with the most natural light – will be dedicated to bioengineering and practical work in materials science.

However, the outstanding feature of the facility is its light and glass atrium of 700 square meters rising 17 meters high. It pierces the building at its center and inundates nearly all the floors with light. Criss-crossed with walkways that connect  various floors, the atrium is primarily a place for encounters and collaboration. "The large walkways function as spaces for work and meeting. The small ones are only places to pass through," says Elvio Alloi, head of the building project. On each floor, an atrium space will be reserved for exhibitions to draw attention to certain research.

community, which can participate in various experiments. Its open atrium is particularly conducive to these kinds of exercises.

For now, experiments are focused on two areas: studying the movement and behavior of users in real-time in different rooms and developing a model of the building’s energy management.

Using the building as a virtual battery
The energy project involves several professors from STI and IC. The building is particularly intended to be used as a virtual storage battery that is capable of changing its electrical consumption according to the state of the electrical network. "Peaks in electricity production linked to fluctuations in renewable energy cause instability in the grid. To reduce them, we can either use expensive batteries or make subtle changes in temperature in an intelligent building, which thereby becomes a virtual battery," said Jean-Yves Le Boudec, Professor in IC. In this model, the building can vary its power consumption on demand, without users ever noticing.

To establish their template for monitoring, researchers will use sensors for light, humidity and temperature present in a selection of rooms to understand the movement of air in the room and the consequences of a morning preheating, for example, or of brief shut-offs in the heating system. "The first tests, however, will be used on a virtual model," says Colin Jones, Professeor at the School of engineering.

Confronting people about their energy consumption

In parallel, the research group of Prof. Maher Kayal is taking a very different approach. It will encourage people to become proactive and to adapt their behavior so as to reduce energy consumption. The concept is to display energy consumption on a tablet in real time (electricity, hot water, etc.), and to compare the results with the neighboring office. "We want to place people at the center of reflection, because they can only take action for the environment to the extent that they are properly informed," says Prof. Kayal.

For this experiment, 32 of the new offices will be equipped with sensors on electrical outlets as well as a tablet developed by eSMART, an EPFL start-up. The tablet, which can also be connected to a smartphone, enables users to continuously track their consumption. "It’s a little like the systems in automobiles which display fuel consumption in real time," says the professor. This will eventually push the concept even further, stating the price of energy, for example, or the point at which energy must be consumed, according to the production of renewable energy in the electrical grid. "This system can work on any building," adds Prof. Kayal. "It could be integrated very easily."

The movement of users under the microscpoe
Other groups of scientists from the Schools of ENAC, STI and IC each plan to study the evolution of the flow of people using video cameras and fiber optics. The collected data will be processed by image and signal processing systems. "The slab of the ground floor and stairs leading to the first floor of the building are home to optical fibers, and we have already planned locations for multiple cameras," explained Pascal Vuilliomenet, Research Associate. In their recordings, scientists will focus only on the crowd and not on individuals, so as to respect their privacy. The identity of users, for example, will never be recorded. "This study will help us understand how the building is used, and how the architectural environment can influence group behavior," said Pascal Fua, Professor in IC.

EPFL hopes that eventually many interdisciplinary projects of this type can be done in this building. "We invite researchers to come and exploit these premises for research and unprecedented educational oportunities," adds Pascal Vuilliomenet. 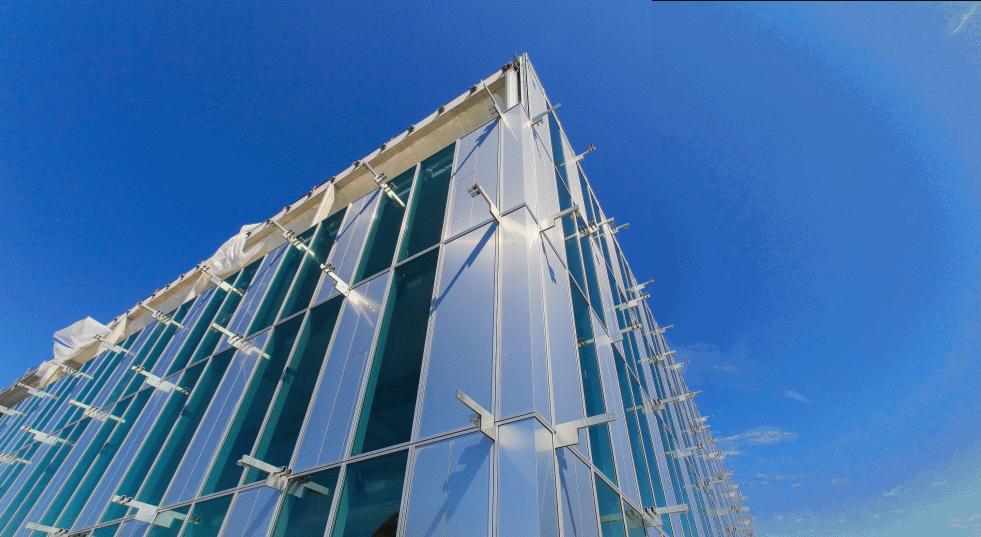